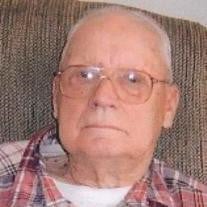 Russell M. Burkhart September 15, 1923 -- April 15, 2012 Russell M. Burkhart, 88, of LaGrange, formerly Shipshewana, died at 1:00 pm on Sunday, April 15, at Millers Merry Manor- LaGrange. He had been in declining health the past month. He was born on September 15, 1923 in Saline, MI, to Charles R. and Vera F. (Mast) Burkhart. On June 8, 1946 in Manchester he married Maxine Burmeister; she survives. Survivors in addition to his wife are twin daughters, Jean R. (Jeff) Farmwald of Half Moon Bay, CA, Joan K. (Ray) Bontrager of Shipshewana; a son, Mark E. (Denise) Burkhart of Boise, ID; 8 grandchildren, Jacquelynn, Megan, Brandon, Summer, Autumn, Eden, Jada, and Avery; three great-grandchildren, T.J., Izabella and Brooklyn; many nieces and nephews. He was preceded in death by his parents, a son, Richard R. Burkhart, brother, Charles R. Burkhart. He served 20 years at Saline, MI Community Schools before moving to Shipshewana in 1972 where he worked for Shipshewana Community Schools. He was a WWII Army Veteran, a livestock hauler and taxi driver for the Amish and attended Shipshewana Methodist church. Visitation will be from 2:00 - 4:00 pm and 6:00- 8:00 pm Wednesday April 18, at Miller-Stewart Funeral Home, 1003 South Main Street Middlebury and from 12:00 -2:00 pm Thursday, April 19, at Robison-Bahnmiller Funeral Home in Saline, MI with a funeral service following at 2:00 pm. Services will be conducted by Pastor John Wolf of Shipshewana Methodist Church. Burial will be in Oakwood Cemetery, Saline, MI. Memorials may be given to the American Disabled Veterans or the Arthritis Foundation. Online condolences may be sent at millerstewartfuneralhome.com.

The family of Russell M. Burkhart created this Life Tributes page to make it easy to share your memories.

Send flowers to the Burkhart family.