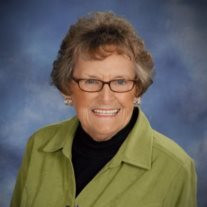 Age 83, passed away on Sunday, February 9, 2014 at her home. She was born July 10, 1930 in Saline, MI, the daughter of Karl and Irene (Kleinschmidt) Schnearle. On December 26, 1957 in Angola, IN, she married Robert G. Holliday and he preceded her in death on May 27, 2012. Ruth graduated from Ann Arbor High class of 1948. She went on to work at Sharpe Dental Labs and University Microfilms. She had a lifelong passion for horses and belonged to the American Quarter Horse Association and the Michigan Quarter Horse Association, where her husband Bob was a member of the Hall of Fame. She last showed at the American Quarter Horse Association Select World Championship Show in Amarillo, TX, in 2009 and 2011. Ruth was a member of First United Methodist Church of Saline. Survivors include her niece Mary (Tom) Robertson, nephew James (Jane) Schnearle, brother-in-law Jack (Diane) Holliday, brother-in-law Jim (Nancy) Holliday, sister-in-law Gertrude White, step-daughter Holly Millen, and many nieces, nephews, and a dear friend Marvin Curry who has been like a son to her. Funeral Services will be held on Wednesday, February 12, 2014 at 11:00 A.M. at the First United Methodist Church in Saline, with Rev. Laura Speiran and Rev. David Bucholtz officiating. Burial will take place at Lodi Twp. Cemetery at a later date. Memorial contributions may be made to the church. Envelopes will be available at the Robison-Bahnmiller Funeral Home in Saline where friends may begin calling on Tuesday, February 11, 2014 between the hours of 3:00 P.M. and 8:00 P.M. and additional viewing will take place at the church on Wednesday, February 12, 2014 from 9:00 A.M. until the time of service at 11:00 A.M. To sign Ruth’s guestbook, to leave a memory, or for more information or directions please visit www.rbfhsaline.com.

The family of Ruth B. Holliday created this Life Tributes page to make it easy to share your memories.

Send flowers to the Holliday family.