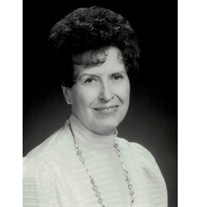 Age 93, passed away peacefully on Wednesday, March 30, 2016 at the Linden Square Assisted Living Facility in Saline, MI. She was born September 14, 1922 in Scofield, UT, the daughter of Bernard and Hildur F. (Olson) Newren. She was the youngest of seven children. She had 5 sisters (Evelyn, Lorna, Afton, Aleen, Lucille) and one brother, Elmer. Her mother died when she was 10 years old. Shortly after her mother’s death, she had a ruptured appendix and was hospitalized for almost 3 months. She spent several summers on her friends ranch after this to help her to regain more strength. When was about 5 years old, the family moved to Salt Lake City where she graduated from East High. She came to Ann Arbor, MI in 1938 to help her sister with her daughter. Here she met her first husband, Roy, and they were married in 1940. Shortly after Pearl Harbor, Roy enlisted in the Army. After basic training, he went to officer training school and became a First Lieutenant. During this time, Claudia was born in Baltimore in 1943 and Edd was born in Rochester in 1945. They lived in New York City in a Quonset hut in a neighborhood built for returning vets. In 1948 they moved to Detroit and here Waine was born in 1951. They moved to Dearborn in 1955 for better schools for the children. Ruth and Roy were very active in their Church. She served as the first young womens president in Michigan. He served in the stake organization. Roy died in 1967. Ruth then married Robert Kroepel. She was a secretary at Ford Motor Company for many years. She was very active in the Detroit Story League winning several awards for the service they provided to schools and libraries. She lost her sight in the 1980’s. Robert died in 2008. She then moved to Saline and lived with Claudia until 2015 when she moved to Linden Square. Survivors include her children Claudia (Ellis) McGraw, Edward (Lynn) Thomas, Waine (Lina) Thomas, plus 2 step-children Elisabeth Kroepel and Geoffrey Kroepel. Other survivors include 10 Grandchildren, fourteen Great-Grandchildren, and 2 Great-Great-Grandchildren. Ruth was preceded in death by her brother and five sisters. Funeral Services will take place on Friday, April 8, 2016 at 11:00 A.M. at the Church of Jesus Christ of Latter-day Saints in Saline, MI. Burial will take place following the service in the Glen Eden Lutheran Memorial Park in Livonia, MI. Memorial contributions in Ruth’s name may be made to the LDS Perpetual Education Fund. Envelopes will be available at the Robison-Bahnmiller Funeral Home in Saline where friends may begin calling on Wednesday, April 6, 2016 between the hours of 3:00 P.M. to 8:00 P.M., on Thursday, April 7, 2016 from 3:00 P.M. to 8:00 P.M. and also at the Church on Friday, April 8, 2016 from 10:00 A.M. until the time of service at 11:00 A.M. To sign Ruth’s guestbook, to leave a memory, or for more information or directions please visit www.rbfhsaline.com.

Age 93, passed away peacefully on Wednesday, March 30, 2016 at the Linden Square Assisted Living Facility in Saline, MI. She was born September 14, 1922 in Scofield, UT, the daughter of Bernard and Hildur F. (Olson) Newren. She was the youngest... View Obituary & Service Information

The family of Ruth A. Kroepel created this Life Tributes page to make it easy to share your memories.

Send flowers to the Kroepel family.