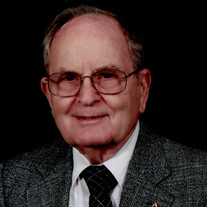 Samuel R. Lloyd, age 94, passed away on Tuesday, May 15, 2018 at the Linden Square Assisted Living Facility in Saline, Michigan. Sam was born on September 19, 1923 in Carmi, IL, the son of Starr Hanford and Hetty Adelia Kenyon (Burke) Lloyd. He attended public schools in Oconto, Wisconsin and graduated from high school in Rensselaer, Indiana. He then entered Purdue University at the age of 15. Sam served in the U.S. Army as part of the Asiatic Pacific Theatre of Operations of World War II from 1943 to 1946, including 6 months living in a fox hole on the Japanese island of Iwo Jima, which was the most heavily fortified area in the history of warfare. He landed there in the first two weeks of the battle for Iwo Jima. His rank was Staff Sergeant. His father, Starr Hanford Lloyd, had also been an army chaplain in World War I. Sam graduated from Purdue University with a degree in Mechanical Engineering in 1947. In January of 1951 he married Billie Kathryn Davis of Erwin, Tennessee. Sam was employed by the Electro-Motive Division of General Motors from 1947 until 1953. He instructed railroad firemen and engineers in the operation of diesel-electric locomotives to replace steam engines. From 1953 to 1983 he was employed by the Allison Division of General Motors in Indianapolis, Indiana where he wrote instructions for updating gas turbine engines at the time of overhaul. He also served as an Associate Advisor, Assistant Cubmaster, Assistant Scoutmaster and District Chairman in the Boy Scouts of America in Indianapolis. As a resident of Speedway, Indiana and also being a great photographer, Sam worked during the month of May each year for NBC taking video movies of the Indy 500. Sam was also a devoted hiker with the Indianapolis Hiking Club. During his years as a member of Chapel Rock Christian Church, he organized church bus routes and drivers to support services and special events. He became a resident of Johnson City in 1989 where he was a member of the First Christian Church and the Mr. and Mrs. Sunday School Class. Sam founded the Johnson City Hiking Club, a group of nature-loving people that hiked many trails in the Appalachian mountains. He was preceded in death by his wife Billie in November of 2008. Survivors include his four children Linda (Robert) Stache of Scottsdale, AZ, David (Terry) Lloyd of Saline, MI, Daniel (Lynn) Lloyd of Madison, Alabama, and Nancy Lloyd of Sonoma, CA. Other survivors include his grandchildren Michael Lloyd of Boston, MA, Emily Davey of Dexter, MI, Dana Lloyd of Madison, Alabama, great-grandchildren Reid and Grant Davey of Dexter, MI, and Elizabeth and Everly Lloyd of Boston, MA. Burial will take place in the Washington County Memory Gardens Cemetery in Johnson City, Tennessee at a later date. To leave a memory you have of Sam, to sign his guestbook, or for more information please visit www.rbfhsaline.com

The family of Samuel R. Lloyd created this Life Tributes page to make it easy to share your memories.

Send flowers to the Lloyd family.