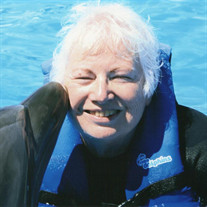 Sarah Ellen Hanifi, 85, of Saline, Michigan passed away peacefully on Tuesday, September 14, 2021 at 85 years of age. Sarah was born July 6, 1936 to the late Ruth Gould Maynard Campbell and William Robert Francis Campbell. She grew up on the Saline Valley Farms, a farming collective developed in the 1930s that took in Japanese-Americans recently released from internment camps and Jewish immigrants fleeing Europe. She was preceded in death by her brother, David Campbell. As a single, divorced young woman, she raised three children on her own and is survived by them; Sophia Hanifi (Dave Keeney), Khalid Hanifi (Lisa Murray), and Maryam Barrie (Paul Barrie). She is also survived by her four grandchildren; Lucie Rae Hanifi, Jasper James Hanifi (Amanda Hanifi), Rowan Violet Barrie, and Morgan Sophia Barrie (Evan Minsker). Sarah earned a Bachelor’s degree in Spanish at Michigan State University and a Master’s degree in Elementary Education. She later earned a Specialist’s degree in Reading at Eastern Michigan University. Sarah worked for many years as a public school teacher in the Manchester Public School System, though she was also a Master Consulting Rosarian for the American Rose Society. She served as President of the Huron Valley Rose Society and was a judge at rose shows. For many years, she wrote two widely read newsletters. She loved flowers, especially roses. Sarah found meaning and value in studying the works of Edgar Cayce in the A.R.E. (The Association for Research and Enlightenment), participating in a study group of those teachings for many years. She was able to travel with her study group to England and Scotland, a lifelong dream. She was proud to be a member of Clan Campbell. She was actively involved in the Saline First United Methodist Church her entire life. She loved music, and played in the church orchestra, choral choir and bell choir until her health declined. She was a member of the quilting group at her church. Curious about the world we live in, she was always open to learning more about life. She loved reading, watching tennis, figure skating, and live performances of music. She spent most of her life in Saline, until her move to Dexter in 2003. She moved to the Saline Evangelical Home in June 2021. Sarah will be deeply missed. A Memorial service will be held at the First United Methodist Church in Saline, on Friday, September 24, 2021 at 11:00 A.M. with a visitation starting at 10:00 A.M. Due to current safety and health concerns, guests will be required to wear masks. Memorial contributions in her name may be made to the Saline District Library or the Matthai Botanical Gardens in lieu of flowers, and envelopes will be available at the church. To sign Sarah’s guestbook, to leave a memory, or for directions please visit www.rbfhsaline.com.

Sarah Ellen Hanifi, 85, of Saline, Michigan passed away peacefully on Tuesday, September 14, 2021 at 85 years of age. Sarah was born July 6, 1936 to the late Ruth Gould Maynard Campbell and William Robert Francis Campbell. She grew up on the... View Obituary & Service Information

The family of Sarah Ellen Hanifi created this Life Tributes page to make it easy to share your memories.

Send flowers to the Hanifi family.