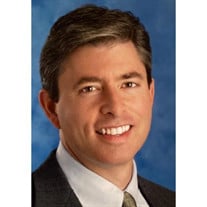 Scott Fielding Madden, 59, of Ann Arbor, Michigan passed away peacefully on Monday, April 26, 2021, after a courageous battle with kidney cancer. Scott was born on June 2, 1961 to the late George William Madden and Margaret Goodheart Madden of Decatur, Illinois. On September 21, 1985 Scott and Lisa Sonoc were married in Sterling, Illinois. They were blessed with nearly 36 happy years together and four beautiful children. They were the joy of his life. Scott is survived by his wife Lisa, his adult children Jennifer (John) Randazzo of Westfield, Indiana, Emily (Jon) Taylor of Howell, Michigan, Tyler (Emily Pardington) of Ada, Michigan, and Luke Madden of Ann Arbor, Michigan, and three young grandchildren Ella, Lyla, and Leo. Scott was one of eight children. He is survived in death by Leslie (Bill) Penn of Midway, Kentucky, Sally Betscher of Springfield, Illinois, Wendy (Chris) Burke of Ann Arbor, Amy (John) Lazzaretto of Lake Forest, Illinois, and Jeff (Elizabeth) Madden of River Forest, Illinois. Scott was preceded in death by his parents and two sisters, Betty Madden Fox and Nancy Madden. He is also survived in death by his mother-in-law, Kathleen Sonoc of Bonita Springs, Florida, Scott (Marsha) Sonoc of Beaufort, South Carolina, Melanie (Steve) Foulds of Crown Point, Indiana, Carol (Kevin) Bagaline of Austin, Texas, and many nieces and nephews. He was preceded in death by his father-in-law, Frank G. Sonoc. Scott and Lisa met during their college years and graduated from the University of Iowa in 1984. After completing an M.B.A. and Masters in Public Health Administration at the University of Michigan in 1989, Scott was employed at the Michigan Head Pain and Neurological Institute in Ann Arbor, Michigan, as Administrator for 32 years. He had a loyal and trusted alliance with Dr. Joel R. Saper, the Founder and Director of the Institute. Scott’s gratitude extends to his colleagues with whom he had the privilege of working for so many years. Scott was a devoted and beloved husband, father, and grandfather. He was a man of deep and abiding faith. He was a strong, sincere, selfless, and jovial man who loved deeply and whom was deeply loved by so many. Scott was the quintessential family man; family gatherings were what he loved most. He was a gifted and accomplished drummer and enjoyed playing golf and spending many summers at Lake Michigan. Scott was a parishioner of St. Andrew the Apostle Catholic Church in Saline, Michigan. A Mass of Christian Burial will be held on Friday, April 30, 2021 at 11:00 A.M. at St. Andrew the Apostle Catholic Church, 910 Austin Drive, Saline, MI. 48176. Father John Linden will be officiating. Memorial contributions may be made to St. Jude Children’s Hospital or to St. Andrew Catholic Church. Burial will immediately follow at Oakwood Cemetery in Saline, Michigan. All are welcome to attend. Scott will be immeasurably missed. May his soul rest in peace. For more information or directions, please visit www.rbfhsaline.com

The family of Scott Fielding Madden created this Life Tributes page to make it easy to share your memories.

Send flowers to the Madden family.