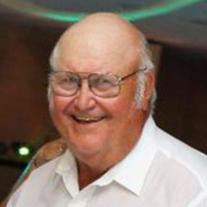 Age 70, ended his battle with Leukemia surrounded by family on November 18, 2012. He was born May 13, 1942 to Andrew and Cecelia (Szyndlar) Poet in Wayne, Michigan. He lived there until 1957 when the family moved to Manchester, Michigan. There he attended Saline High School and graduated in 1960. Later he graduated from Michigan State University in 1962 with an Associate Degree in Agriculture Technology. On November 16, 1963 he married Beverly (Condit) and she survives. Stan was a farmer until 1985. In 1984 he became the Facilities Manager of the Washtenaw Farm Council Grounds in Ann Arbor, Michigan, where he retired in 2011. Over the years Stan was very active in: Future Farmers of America (FFA), Washtenaw Farm Bureau, Manchester Jaycees, Michigan Cattlemen Association, Farmers-A-Go-Go community action group, Washtenaw Farm Council, Michigan Festival and Event Association, and Michigan Association of Fairs and Exhibitions. He was also a member of the Huron Gun Collectors, National Rifle Association, National Wild Turkey Federation, and the Tri-County Two-Cylinder Club. In addition to his wife Beverly, survivors include his four children: Judith (Stephen) Gilmore of Britton, Michigan, Robert (Lynda) Poet of Manchester, Michigan, Eric (Karen) Poet of Saline, Michigan, and Scott (Lisa) Poet of Manchester, Michigan. Other survivors include grandchildren: Josie and Rebekah Gilmore, Deborah (Andrew Stocks), William and Richard Poet, Samantha (Michael) Conway, Erica (Randy) Monty, and McKenzie Poet, three great-grandchildren: SarahLyn Poet, Grace Conway, and Tyler Monty. Also surviving are his father-in-law Eldon Condit and several brother-in-laws, sister-in-laws, cousins, nieces and nephews. He was preceded in death by his parents, an infant brother and infant sister, mother-in-law Cleo Condit, and grandson Daniel Gilmore. Cremation has taken place. A Memorial Service will take place on Monday, November 26, 2012, at 11:00 A.M. at Christ Our King Lutheran Church in Saline with Chaplain Dave McNeil, officiating. In lieu of flowers memorial contributions may be made to the Saline Chapter FFA Program or to Karmanos Cancer Center at the Detroit Medical Center. Envelopes will be available at the Church where friends may begin calling on Saturday, November 24, 2012, between the hours of 5:00 P.M. to 8:00 P.M. and on Sunday, November 25, 2012, between the hours of 2:00 P.M. to 7:00 P.M. and on Monday, November 26, 2012, from 10:00 A.M. until the time of service at 11:00 A.M. A luncheon will follow the service. To leave a memory, for directions or for more information please visit www.rbfhsaline.com.

Age 70, ended his battle with Leukemia surrounded by family on November 18, 2012. He was born May 13, 1942 to Andrew and Cecelia (Szyndlar) Poet in Wayne, Michigan. He lived there until 1957 when the family moved to Manchester, Michigan.... View Obituary & Service Information

The family of Stanley D. Poet created this Life Tributes page to make it easy to share your memories.

Age 70, ended his battle with Leukemia surrounded by family on...

Send flowers to the Poet family.