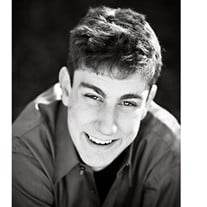 Stephen Jennings O’Neil, 25, died July 27, 2014 in Indianapolis, Indiana. Stephen was born in Chagrin Falls, Ohio on May 20, 1989 and lived in St. Louis, Missouri in his early years before moving to Saline, Michigan. He is a graduate of Saline High School 2007 and attended Michigan State University for three years. He is a passionate poet with a love for writing and making music. During his years at Saline High School, he was very active in the Marching Band, the Wind Ensemble, and was a member of the lacrosse and men’s water polo teams. Stephen was loved by many and his beautiful, intelligent, and reflective soul endeared him to all who knew him. He will be greatly missed as his time here with us was far too short. Stephen was the loving and beautiful son of Suella K. (Tom) Tecco, Brighton, Michigan and Evan James (Regie) O’Neil of Noblesville, Indiana. He was the fun and endearing brother of Creel James (Bailie) O’Neil of Crofton, Maryland, Paige O’Neil of Huntsville, Texas, and Dr. Bert (Lauren) O’Neil of Zionsville, Indiana. And he was the sweet and gentle uncle to Nathan Cole, Lindsay Cole, Nina O’Neil, Evan O’Neil, and August O’Neil. He was the beloved nephew to his aunts and uncles. A memorial service will be held on Saturday, August 2, 2014 at 11:00 A.M. at the First United Methodist Church, 1200 N. Ann Arbor Street, Saline, Michigan with Rev. Dr. James E. Tuttle officiating. In lieu of flowers memorial contributions may be made to the First United Methodist Church or to Dawn Farm. Envelopes will be available at the church where friends may begin calling on Saturday, August 2, 2014 from 10:00 A.M. until the time of service at 11:00 A.M. Stephen’s earthly resting place will be in Oakwood Cemetery, W. Michigan Avenue, Saline, Michigan. Following the Memorial Service a reception to celebrate Stephen’s life with us will be held at the church. Arrangements entrusted to the Robison-Bahnmiller Funeral Home in Saline. To sign Stephen’s guestbook, to leave a memory or for more information please visit www.rbfhsaline.com.

Stephen Jennings O&#8217;Neil, 25, died July 27, 2014 in Indianapolis, Indiana. Stephen was born in Chagrin Falls, Ohio on May 20, 1989 and lived in St. Louis, Missouri in his early years before moving to Saline, Michigan. He is a graduate... View Obituary & Service Information

The family of Stephen J. O'Neil created this Life Tributes page to make it easy to share your memories.

Send flowers to the O'Neil family.