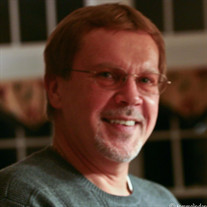 Hollister, Thomas E. Age 65, passed away on Friday, May 19, 2017. Tom was born on April 23, 1952 in Saline, MI, the son of Loran A.C. and Violet G.A. (Kruger) Hollister. Tom was an animal lover; he had a long series of dogs and cats (which he raised and showed for many years), even two prairie dogs! As time passed, he took in a number of strays, several of which he was able to reunite with their anxious owners, keeping the others. Being a long time car buff, he owned several Mustangs, a Dodge Charger and other muscle cars. The most recent of which is the lovely “Plane Jane”. Over the years, Tom’s gardening skills produced beautifully landscaped yards at his several residences. A little more than a decade ago, Tom purchased a nice “home up north” in the Upper Peninsula. He fashioned it as a potential retirement home. Though that dream wasn’t to be, he did spend a good deal of vacation time there and was generous in lending it to others quite regularly. He filled it with lighthouse pictures, antiques, comfy old furniture and beach glass to make himself a cozy nest. In his middle age, conducting searches for his ancestors became his quest. Surprises resulted. Many family members were found, while others slipped through his fingers. Great Aunt Lavina managed to keep her secrets well hidden! Tom’s most notable traits were his never ending, quirky sense of humor, his kindhearted generosity, and loyalty to his friends. Tom’s passing will leave holes in the hearts of his family and many friends. Survivors include his mother, Violet Hollister, sister Suzanne L. (Hollister) McLinden, brother-in-law Tom McLinden, nephew Andrew McLinden and niece Leigh McLinden. He was preceded in death by his father in December of 1998, and his dear friend Tommy Campbell. A Memorial Service will be held on Tuesday, June 6, 2017 at 3:00 P.M. at the Robison-Bahnmiller Funeral Home in Saline, with Pastor Drexel Morton officiating. In lieu of flowers memorial contributions may be made to the Mackinac Animal Aid, P.O. Box 71, St. Ignace, MI 49781. Envelopes will be available at the funeral home where friends may join the family for a visitation on Tuesday, June 6, from 1:00 P.M. until the time of service at 3:00 P.M. Light refreshments will be provided following the service. To leave a memory, to sign Tom’s guestbook, or for more information or directions please visitwww.rbfhsaline.com.

The family of Thomas Earl Hollister created this Life Tributes page to make it easy to share your memories.

Send flowers to the Hollister family.