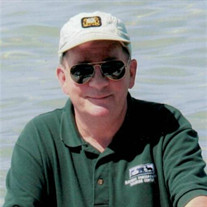 Tom died on Sunday, May 10, 2015 at Sparrow Hospital in Lansing, MI, at the age of 64. He lived with his sister, Elizabeth, in Okemos, MI since 2011. He was born June 27, 1950 in Ann Arbor, MI, the son of Jay Grant Huntington and Mary Vedder Huntington. Survivors include his mother, Mary Huntington of Ann Arbor, siblings James Grant Huntington of Iowa City, IA and Elizabeth Burrows Huntington of Okemos, MI. Also surviving is his aunt, Gale H. Yerges. Other survivors include his cousins Joan H. Sharpe, Lynn H. Buhl, Linn C. Mo, Richard B. (Karen) Chadwick, John L. Botterell, and many close friends. Tom was preceded in death by his father, Jay Huntington. Cremation has taken place. Tom attended University High School, the University of Michigan, and graduated from Eastern Michigan University. A Memorial Service will be held on Sunday, June 28, 2015 at 2:00 P.M. at St. Andrew’s Episcopal Church, 306 N. Division Street, Ann Arbor, MI. Tom was an avid sports fan of the University of Michigan and the Detroit Tigers, and recently, when successful, the Detroit Lions. He spent hours on the telephone with his friends, discussing the latest sporting news. He worked for The National Park Service for many years in Yellowstone National Park and later at Sleeping Bear National Lakeshore in Michigan. He loved all of northern Michigan, especially Torch and Higgins Lakes. He knew every northern road and would drive his jeep all over the north country. He enjoyed cruising around Torch Lake in his restored 1961 Century Sabre inboard boat, the "Elizabeth B," named for his loving sister. Top is missed by all who had the pleasure of knowing him. His family would like to thank the wonderful physicians and medical personnel who attended him in his illness, both at St. Joseph Mercy Hospital in Ann Arbor and at Sparrow Hospital in Lansing. Memorial contributions may be made to the Torch Lake Protection Alliance, P.O. Box 706, Bellaire, MI, 49615, or to The Lakeside Memorial Fund, 5805 Summerset Drive, Midland, MI, 48640, or to a charity of one's choice. Envelopes will be available at the church.

The family of Thomas V. Huntington created this Life Tributes page to make it easy to share your memories.

Send flowers to the Huntington family.