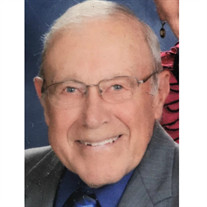 Thomas William Love, age 86, passed away peacefully at home on Friday, August 2, 2019. Tom was born in Detroit, MI on August 5, 1932, the son of the late Thomas S. and Edna (Daniel) Love. He graduated from Saline High School class of 1950. He worked for Graf’s Gulf Station until 1956. He was drafted into the United States Navy. On May 26, 1956 in Britton, MI, he married Norine Schwartz and she survives. When he returned from service, he was employed by Ford Motor Company where he retired in 1996 after 32 years. Tom was an active member of Trinity Evangelical Lutheran Church of Saline. In addition to his wife he is survived by his children Michael (Terri) Love, Linda (Jeff) Davis, grandchildren Tyler Love, Autumn Love, Sydney Fowler, Miranda Fowler, and step-grandchildren Vada Davis, Jeffrey Davis, Ashley Jefferies, and Shelby Gallagher. Also surviving is his sister Edna Mae Love, brother-in-law Wilfred Schwartz, sister-in-law Mary Schwartz, and several nieces and nephews. Tom was preceded in death by his parents, two brothers-in-law Leon Herter and Nelson Helm, and two sisters-in-law Audrey Herter and Dorothy Helm. He was a much loved husband, father, and grandfather. Funeral Services will be held on Thursday, August 8, 2019 at 11:00 A.M. at Trinity Evangelical Lutheran Church with Pastor Smith and Pastor Natsis officiating. A luncheon will be held following the service. Friends may join the family for a time of visitation on Wednesday, August 7, 2019 from 4:00 P.M. to 8:00 P.M. at the Robison-Bahnmiller Funeral Home in Saline. Visitation will also be held at the church on Thursday from 10:00 A.M. until the time of service at 11:00 A.M. Burial will take place at a later date in Union Cemetery. In lieu of flowers, memorial contributions may be made to Trinity Evangelical Lutheran Church or Hospice of Jackson. Envelopes will be available at the funeral home and church. To sign Mr. Love’s guestbook, to leave a memory, or for directions please visit www.rbfhsaline.com.

Thomas William Love, age 86, passed away peacefully at home on Friday, August 2, 2019. Tom was born in Detroit, MI on August 5, 1932, the son of the late Thomas S. and Edna (Daniel) Love. He graduated from Saline High School class of 1950. He... View Obituary & Service Information

The family of Thomas William Love created this Life Tributes page to make it easy to share your memories.

Thomas William Love, age 86, passed away peacefully at home on...

Send flowers to the Love family.