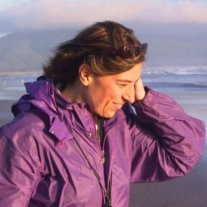 Otero-Corchon, Veronica PhD Ann Arbor, MI Veronica Otero-Corchon, age 48, peacefully passed from this world on Monday, February 18, 2013 at her home in Ann Arbor. This daughter, sister, wife, mother and dear friend became a symbol of strength, grace and humor as she continued to engage deeply with the best of life despite the challenges of cancer over her last 20 months. Born in Buenos Aires, Argentina, Veronica attended the National Buenos Aires high school, Argentina’s most prestigious secondary school. She received a Bachelor of Science from the School of Natural Sciences. She received her Bachelor of Science and PhD in Neuroscience from the University of Buenos Aires. Her post-doctoral training following her research on obesity and endocrine control brought her to the Oregon Health & Science University (OHSU) in Portland, OR. She later took a position in the lab of Dr. Malcolm Low at OHSU and continued her work with Dr. Low at the University of Michigan Medical School. It would be difficult to compare Veronica’s success as a scientist, with the part of her life that began with her love for Richard Geglio, whom she married in 2001. Their lives were blessed with a son, Marco, and in 2010, the family moved from Portland to Ann Arbor. Along from her work as a researcher with the University of Michigan, Veronica, with her husband Richard, become very involved in the Ann Arbor community, especially the activities at Marco’s school, Wines Elementary. Veronica leaves her dear Richard and Marco, her mother, Beatriz Corchon M.D. ; her brother Juan Pablo Otero-Corchon M.D, his partner, Analia, and nephew Joaquin. She was pre-deceased by her father, Pablo Otero M.D . She will also be sadly missed by the extended Geglio family, sister-in-law Sherry Bartley, nieces, nephews, and many, many cousins. Funeral Mass for Vero will be at St. Mary Student Parish 331 Thompson St. in Ann Arbor on Saturday, February 23, 2013 with Rev. Fr. Daniel Reim, celebrant. Visitation with family will be from 10 to 11 AM and Mass will be at 11 AM, followed by a luncheon at the church. On Friday, February 22, 2013 from 7 to 9 PM, an open house gathering will take place at the common room of Newport West, 2200 Down Up Circle in Ann Arbor. This event will welcome the families and friends of Marco from school and neighborhood. Family and friends of Richard and Veronica are also welcome to attend. In honor of Veronica, please consider making a donation to the Cancer Support Community, 2010 Hogback Road, Ann Arbor, MI. 48105. To leave a memory, for more information or for directions please visit www.rbfhsaline.com.

The family of Veronica Otero-Corchon created this Life Tributes page to make it easy to share your memories.

Send flowers to the Otero-Corchon family.