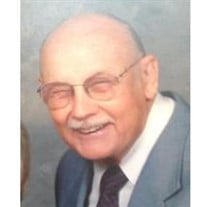 Victor and Beverly Barnaby celebrated 77 years of marriage by toasting with Vernor’s floats. The Saline couple sat on their porch May 1, celebrating their lives together and cherishing memories with their family, including six grandchildren and eight great-grandchildren. They had been together since high school in Detroit, where it was love at first sight, the couple’s family said. In the years since, they’d gone through a lot together: a deployment in World War II, the deaths of three of their five sons and Victor’s illness, chronic inflammatory lung disease. Victor wanted to live to celebrate the anniversary, his family said. And just hours afterward, it was finally Victor’s time. He died May 2, 2020, his son Steve Barnaby said. He was 96. His death was not unexpected – his COPD had worsened over the last several months. Family members visited over the last few days to celebrate Victor’s life with him, knowing there would not be a funeral because of restrictions on gathering during the pandemic. Instead, they sat apart and enjoyed their favorite treats. “The last thing he had to eat was a Vernor’s float,” Steve Barnaby said. “We sat around and talked about things we’d done in our lives, all the trips we had taken together. For three days, we just kind of celebrated his life and he was there to do it with us, which is very nice.” Victor and Beverly, 94, lived in Detroit and Saline for most of their lives, said Steve Barnaby, 73. After serving in the U.S. Navy on a minesweeper during World War II, Victor became a Detroit police officer, later moving on to other jobs in journalism, security and as a court bailiff in Washtenaw County, finally retiring at 80. Beverly was a teacher at Lutheran schools in Detroit. The couple became active Freemasons and served in various other charity organizations in the Ann Arbor area after moving in the 1970s. Steve Barnaby said his father loved to read – he studied English Literature at Wayne State University while working as a police officer because he loved it, and his personal library included thousands of books. The couple would often read books together and talk about them. “Matter of fact, the day that my dad died, we’re reading ‘Nostromo,’ which is a novel by Joseph Conrad, and we call each other up on the phone, we would talk about it,” Steve Barnaby said. “He took voluminous notes on everything that he did. And when he died, sitting next to his chair was yellow legal pad full of notes about ‘Nostromo.’” For he and Beverly, the key to a successful marriage was allowing each other to be the individuals they wanted to be. “They just really encouraged each other, they love each other for who (they were),” Steve Barnaby said. “I think that they believe that was the secret to their marriage: to allow the other person to kind of grow to be the person they want to be.”

Victor and Beverly Barnaby celebrated 77 years of marriage by toasting with Vernor&#8217;s floats. The Saline couple sat on their porch May 1, celebrating their lives together and cherishing memories with their family, including six grandchildren... View Obituary & Service Information

The family of Victor H. Barnaby created this Life Tributes page to make it easy to share your memories.

Victor and Beverly Barnaby celebrated 77 years of marriage by...

Send flowers to the Barnaby family.