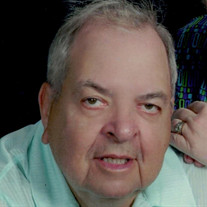 Walter Charles Hunsinger 1/10/1932 – 10/4/2017 Walter Charles Hunsinger “Bud”, 85 of Saline, Michigan passed away on Wednesday, October 4, 2017, in his home with his wife Karen J. Salsbury-Hunsinger by his side. The cause of death was due to a challenging battle with pancreatic cancer that he eventually lost, but he is now in heaven enjoying the good life. Walter is survived by the following: Children: Adell Spiegelberg, Sondra Hunsinger, Karen Brown, Mark Hunsinger & Bruce Hunsinger Spouses: Walt Spiegelberg, Sharon Hunsinger Grandchildren: Amanda Hunsinger, Erika Brown, Mikaela Brown, Alex Regal, Matthew Regal, Carlie Regal Stepchildren & Spouses: Kecia Graham, Trevor Staples, Tidra Staples, Kelly Stupple, Paco Dura Stepgrandchildren: Trevor Graham, Meg Graham, Devin Graham, Bjorn Graham, Leah Dewey, Xisco Dura, Maite Dura and great grandchild Bernard Graham He is preceded in death by his beloved first wife Irene Joan Hunsinger in 2006, his sister Mary Louise Husseltine in 2006, his mother Marie Mary Gerdes-Hunsinger in 2001 and his father Walter Charles Hunsinger I in 1934. His favorite childhood memories were spending summers at his uncle’s farm in Mt. Olive, Illinois with his sister Mary. On the farm, he fell in love with animals that carried through his adulthood by filling the house with pets from exotic birds to domestic cats and dogs. The loss of his Father at a young age made him want to be more involved in the lives of his children. Professionally, Walter had a successful and robust career in the auto industry working his way up to Lead Prototype Designer working with clay models. He was an avid traveler who saw the world and loved taking river cruises through Europe. In retirement, being a Florida Snowbird was his favorite hobby. Every morning started with a round of golf or a quick shuffleboard match with friends. Walter loved the game Jeopardy, every night you could find him sitting in his recliner in front of the TV rattling off trivia answers to Alex Trebek – martini in hand. Memorial Services will be held on Sunday, October 15, 2017, at Brecon Village at 1:00 P.M. 200 Brecon Drive, Saline, MI 48176, phone (734) 429-1155. In lieu of flowers, the family would appreciate donations to be made to the American Cancer Society and envelopes will be available at the service.

The family of Walter Charles Hunsinger created this Life Tributes page to make it easy to share your memories.

Send flowers to the Hunsinger family.