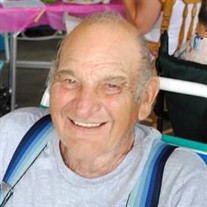 Age 87, passed away on Monday, December 15, 2014 in the loving care of Arbor Hospice surrounded by his family. He was born December 22, 1926 in Saline, MI, the son of Paul and Olga (Finkbeiner) Kuebler. On November 12, 1960 in Pinckney, MI, he married Felicia Oleski and she survives. Walter was a retired Chrysler worker. He was a lifelong resident of Manchester where he was an avid farmer. He enjoyed spending time with his family and friends as well as working on his farm. He especially liked having coffee with his friends at the Bridgewater Bank Restaurant in Bridgewater, MI. Survivors in addition to his wife include their daughter Pauline (Tim) Linski, son Stanley (Pam) Kuebler, granddaughters Kimberly and Kelly Kuebler, Megan and Marisa Linski, his sister Marie Herter, and several nieces and nephews. He was preceded in death by his parents, a sister Katherine and her husband Bill Guenther, and brother-in-law Paul Herter. Cremation has taken place. A Memorial Service will be held on Monday, December 22, 2014 at St. James United Church of Christ in Saline, MI, with Rev. Wallace Tatara officiating. Burial will take place in the St. James Cemetery following the service. Memorial contributions may be made to Arbor Hospice. Envelopes will be available at the church where friends may begin calling on Monday, December 22, 2014 from 10:00 A.M. until the time of service at 11:00 A.M. To sign Walter’s guestbook, to leave a memory, or for more information or directions please visit www.rbfhsaline.com.

The family of Walter P. Kuebler created this Life Tributes page to make it easy to share your memories.

Send flowers to the Kuebler family.