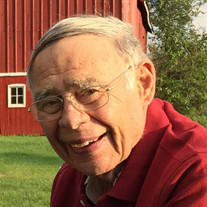 Aged 84, passed away Thursday, December 31st, 2015 at Arbor Hospice in Ann Arbor, MI. Wayne was born on July 30th, 1931 in Ann Arbor, MI to parents Ferman and Lucy (Webster) Clements of Saline, MI. Wayne grew up helping his dad on the family farm. He attended the Lodi-Plains one-room country school and graduated in 1949 from Saline High School. Wayne graduated from Michigan State University in 1953 with a B.S. in Agricultural Engineering. He joined the Army Ordinance Corps, serving in the U.S. and Korea. After his service was completed, he married Virginia Jane Rowe on April 7, 1956 and they moved to Mishawaka, IN to work at Wheelabrator Corporation. In 1973, their daughter Penny (Johnson) was born and the family moved back to Saline. Wayne started an industrial cleaning business, Captain Clean, and worked until he retired in 2000. Wayne’s daughter married Zac Johnson in 1997 and they had Wayne’s grandson Henry in 2006. In 1987 Wayne joined the Saline Area Historical Society, which became his life’s passion. He worked on many projects including the moving of a Livery Barn to the Saline Depot in order to house a windmill and extensive work to the Depot building – which became Saline’s first museum. Wayne worked with the city of Saline to establish and open the Rentschler Farm Museum. Wayne stayed active in the society serving as President until 2008 and then as the Building and Grounds Chairman. He was involved in providing tours at the Rentschler Farm, the Weber-Blaess One-Room Country Schoolhouse, and provided guidance on dozens of historical preservation projects throughout the state. His knowledge and creativity made the Saline Area Historical Society the success it is today and created a framework giving future generations the opportunity to become involved in Saline’s history. Wayne felt that no other work presented the challenge of creativity or the feeling of lasting value that came with museum work with the Historical Society. In addition to his dedication to history, family, and community, Wayne was a lifelong sports fan, having played football, basketball, and baseball for Saline High School and tirelessly cheering on his Michigan State Spartans. His life on the farm led to an enthusiasm for John Deere tractors, and Wayne’s curiosity and excellent sense of direction fed into his interest in travel. He is survived by his daughter and son-in-law Penny and Zac Johnson, his grandson Henry, his sisters-in-law Millicent Mank (John), Alice Marinos (Lou), Helen Rowe Arnoldi, Kathryn Berger and Mildred Hogan (Pat), cousins Harry (Cheryle) Waters and Cynthia Carr (Peter) Kramer, and their families. Wayne is preceded in death by his parents Ferman and Lucy and his wife Jane (2003) his brother-in-law Jack Rowe (2002) sister-in-law Dottie Rowe (1999), brother-in-law Rolley Berger (2011) and his cousins Tom Waters (2011) and Carolyn Carr (2015). Funeral Services will take place on Tuesday, January 5, 2016 at 11:00 A.M. at the First Presbyterian Church of Saline, with Rev. Jaco Bester officiating. Burial will take place in the Lodi Township Cemetery at 2:00 P.M. following a luncheon at the Church. In lieu of flowers, the family asks you make a donation to the Saline Area Historical Society. Envelopes will be available at the Robison-Bahnmiller Funeral Home in Saline where friends may begin calling on Monday, January 4, 2016 from 4:00 P.M. to 8:00 P.M. Visitation will continue at the Church on Tuesday, January 5, 2016 from 10:00 A.M. until the time of service at 11:00 A.M. To leave a memory, to sign Wayne’s guestbook, or for more information or directions please visit www.rbfhsaline.com.

The family of Wayne Webster Clements created this Life Tributes page to make it easy to share your memories.

Send flowers to the Clements family.