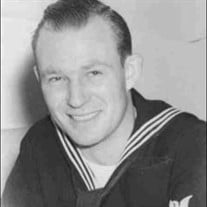 Wendell Charles Ward, 97, died peacefully at Linden Square Assisted Living Facility in Saline on Wednesday, May 29, 2018. He was born November 7, 1920, to the late Fred and Lula Mae (Burlingame) Ward in Theresa, New York. He graduated from Evans Mills High School in 1938, having played on the baseball and basketball teams. Wendell was a proud World War II Navy veteran, serving from 1942-48 as a Machinist Mate on several repair ships, including the USS Hector. On June 4, 1949, he married Eileen Grace Bowker in Syracuse, New York. Eileen predeceased him on June 25, 1998. Wendell was a passionate fisherman and spent many hours fishing on Oneida Lake and Lake Ontario, with his son, Gary, and many friends. He even took the neighborhood kids, as he was a very patient teacher. He and Eileen spent many years as members of Pairs and Squares square dancing club in Syracuse, New York. If he wasn’t working in his vegetable garden you could probably find him tinkering on something. He was Mr. Fix It and was always designing things that would make life easier. Wendell is survived by his son, Gary (Linda) Ward of Saline, MI. Grandchildren, Jessica (Christopher) Priem of Alto, MI, Ryan (Tara) Ward of Manchester, MI and Megan (Austin) Trott of Selma, IN. Great-grandchildren are Alexander, Addison and Andrew Priem; and Braxton, Grayson and Dawson Trott. He is also survived by his sister, Winifred Dwyer of Central Square, NY and brother, Wilfred (Shirley) Ward of Jacksonville, FL, as well as many loving nieces and nephew. He was predeceased by his brother, Ralph Ward and sister, Betty Williams. From the time of his discharge from the Navy until his retirement in 1980, Wendell worked for Carrier/United Technologies in Syracuse, New York, as a repair technician. A celebration of Wendell’s life will be on Monday, June 4, 2018 at 11:00 A.M. at Robison-Bahnmiller Funeral Home in Saline. Visitation will take place before the service from 10:00 A.M. until 11:00 A.M. Burial will be at River View Cemetery in Baldwinsville, New York, at a later date. To sign his guestbook, to leave a memory, or for directions please visit www.rbfhsaline.com.

Wendell Charles Ward, 97, died peacefully at Linden Square Assisted Living Facility in Saline on Wednesday, May 29, 2018. He was born November 7, 1920, to the late Fred and Lula Mae (Burlingame) Ward in Theresa, New York. He graduated from... View Obituary & Service Information

The family of Wendell Charles Ward created this Life Tributes page to make it easy to share your memories.

Send flowers to the Ward family.