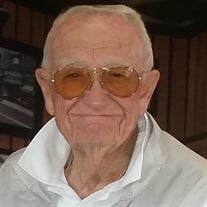 William (Bill) Rogers Mangold of Saline, MI passed away Sunday, January 7, 2018, in Palm Beach Gardens, Florida, at the age of 86 after a hard fought battle with numerous health issues. He died peacefully, surrounded by his beloved family. Bill was born in Kansas City, Kansas, on September 13, 1931, the son of Wilbur “Red” and Catherine (Evans) Mangold. He grew up in California and was a graduate of Burbank High School, and continued his education at Glendale College, Glendale, CA where he earned his commercial pilot’s license and aviation mechanic certifications. On September 22, 1959, he married Olga Jean Pierce, and they were married for 58 years. Bill was a member of the US Marine Corps, and served during the Korean War. He began his career in the aviation industry as a pilot for a mapping company, Fairchild Aerial Surveys. Subsequently, he flew as a corporate pilot for Carroll Shelby, after which he became a sales representative for the Norman Larson Co, a Beechcraft distributor in Van Nuys, California. Until his retirement from aviation, he enjoyed a 25-year career with Champion Spark Plug, Aviation Division, as Marketing Manager for the Northeast U.S. and Canada. This new venture brought him and his family to Michigan. In 1975 he began drawing editorial cartoons. With the encouragement of Paul Tull, editor of the Saline Reporter at the time, his drawings were published in the weekly paper. Later they were published in many other newspapers in Michigan, for a number of years. He also loved playing golf with friends and family, during this period in his life. After his ultimate retirement, he enjoyed several part time jobs including selling ads for the Saline Reporter, and working as a Starter-Marshall at PGA National in Florida, where he and Olga spent winters together. During his summers, Bill sold memberships in, and served as “Ambassador” for, the Saline Area Chamber of Commerce. He was also a longtime member of the First United Methodist Church of Saline. Bill is survived by his wife Olga, daughters Kathryn L. Mangold and Julianne M. (Bruce) Greene, son Mark W. (Janine) Mangold, grandson Zachary Mangold, granddaughters Chelsey (Richard) Jenkins, Kaitlan, Emmalie and Olivia Greene. He was preceded in death by his parents, Wilbur “Red” and Catherine Mangold. A Memorial Celebration of Bill’s life will be held at the First United Methodist Church of Saline, Michigan on Saturday, April 14, 2018 at 11:00 A.M. with a visitation starting at 10:00 A.M. Arrangements made by Robison-Bahnmiller Funeral Home of Saline, MI. In lieu of flowers memorial donations may be made to the First United Methodist Church of Saline Upper Class Scholarship Fund, Disabled American Veterans Charitable Service Trust, or The Cancer Research Institute. Envelopes will be available at the church. To sign Bill’s guestbook, to leave a memory for the family, or for more information please visit www.rbfhsaline.com

The family of William "Bill" Rogers Mangold created this Life Tributes page to make it easy to share your memories.

Send flowers to the Mangold family.