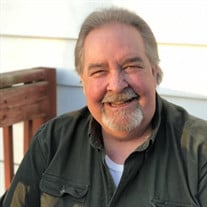 William James Cook, 60, of Interlochen, Michigan passed away suddenly on March 24, 2021. Bill, as he was known, was born on September 27, 1960 to the late James O. Cook and Judith (O’Neil) Cook who raised him in Saline. He is survived by his wife of 34 years, Audrey (Melenyk) Cook. He is also survived by his two children, Alexis Cook and William Cook of Whitmore Lake and his nephew James Cook of Brighton, son of Bill’s brother, the late Timothy Cook, and other nieces and nephews. He is also survived by his fur baby, Shyann (German Shepherd Dog), his grandpuppies, Asteri and Athena, and grandkitties Artemis and Apollo. Bill was a natural born pilot, beginning his career at the Ann Arbor airport fuelling airplanes at age 16, soloing an airplane at age 18 and continuing on to achieve the ranks of Captain, Chief Pilot and Director of Training later in his career. Bill’s career allowed him to see many parts of the world, from Iceland to Italy and beyond, and it gave him a wealth of knowledge and stories to share with anyone who would listen. Bill achieved a major milestone in his life, celebrating nearly 11 years of sobriety after battling active alcoholism for much of his adult life. His family and friends were so proud of this amazing accomplishment. He enjoyed Classic Rock, living Up North, fishing the Great Lakes, riding his “stupid fast” motorcycle and making friends with all sorts of wildlife. Bill deeply loved his wife and children and enjoyed FFF (forced family fun) with them. A Funeral Mass will be held at St. Francis of Assisi Catholic Church in Ann Arbor on Tuesday, March 30, 2021 at 11:30 A.M. with a public visitation starting at 10:30 A.M. Burial will immediately follow the Mass at Oakwood Cemetery in Saline. Memorial contributions in his name may be made to Brighton Center for Recovery and envelopes will be available at the church or can be made at: https://stjohnprovfoundations.org/ways-to-give/donate-online. To leave a memory you have of Bill, to sign his guestbook, or for directions please visit www.rbfhsaline.com.

The family of William J. Cook created this Life Tributes page to make it easy to share your memories.

Send flowers to the Cook family.