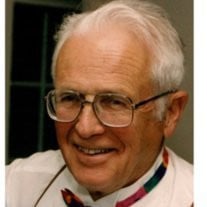 William D. (Bill) Crim, Jr. Saline, MI Age 89, died Tuesday, February 19, 2013 at Brecon Village. He was born on July 11, 1923 in Bronxville, N.Y., the son of William D. and Margaret (Miller) Crim, Sr. He was preceded in death by his wife, Dorothy (Dottie) Crim, who died in 2011 after 58 years of marriage. Bill was a World War II veteran and a graduate of Olivet College. He moved to Saline to be Vice President of Saline Savings Bank, now Comerica. Bill retired in 1988 as a manager of Student Accounting at Eastern Michigan University. He was professionally and personally active in many Saline community organizations over the past 50 years including the Vestry of Holy Faith Church, the Board of United Way of Saline, Saline Area Social Services, National Association of Accountants, Sigma Phi, and Huron Valley Girl Scout Council. For many of the last 45 years, Bill coordinated parking at the Saline Community Fair as a long-time member of the Saline Rotary Club and local Boy Scouts. As an avid Boy Scout, Bill attained the highest rank of Eagle Scout in 1940. After graduating from Lenox Preparatory School in Lenox, Mass., Bill attended Cornell University. He was drafted into the Army in 1942 and sent to Europe in the aftermath of the Battle of the Bulge. His artillery division helped liberate western Czechoslovakia in the American unit that went the farthest east during the war. After discharge from the Army, Bill returned to college. At the University of Rochester, moonlighting as a security guard for the women’s dorm, he met Dottie, an attractive nursing student who became his wife. After marrying in Wilkinsburg, Pa., in 1952, Bill and Dottie settled in Birmingham, Mich., where their four children were born. The young family moved to Saline in 1963, becoming part of the growing community. Despite being on the Board of Directors of the 1966 Saline Centennial, Bill remained determinedly clean-shaven, going to the length of paying $5 to avoid growing a beard. Also of note, the Crim family donkey, El Chocolato, made his first of several local appearances at the Centennial Parade. Bill was known in some circles as a “Cookie Monster,” and was a familiar figure at Romeo’s Dugout and Benny’s Bakery in Saline. Bill is survived by three children, Susan (partner Sylvia Smith) of Alexandria, Va., Rob (wife Cheryl Jacobs Crim) of Sandy Spring, Md., and Peg (husband Ron Hannan) of La Luz, N.M.; three grandchildren, Haley and Jake Crim of Sandy Spring, Md., and Jesse Hannan of La Luz, N.M.; and a sister, Peggy Barry of Washington D.C. In addition to his wife, Bill was predeceased by an infant son, Billy (William D. Crim, III) and two brothers, Shepard and John. Cremation has taken place. A Celebration of Bill’s life will be held on Saturday, May 18, 2013 at 11:00 A.M. at Holy Faith Church 6299 Saline-Ann Arbor Rd., Saline with Rev. Ian Reed Twiss, officiating. In lieu of flowers, the family asks for donations to Brecon Village (Crim Family Endowment for Dementia Education), 101 Brecon Drive, Saline, Mich., 48176, where Bill and Dottie were lovingly cared for in their final years; or to Holy Faith Church, 6299 Ann Arbor-Saline Road, Saline, Mich. 48176, where the Crims were longtime worshippers. Arrangements entrusted to the Robison-Bahnmiller Funeral Home of Saline, Mich. For service information, to sign Bill’s guestbook, to leave a memory, or for more information or directions please visit www.rbfhsaline.com.

The family of William D. Crim created this Life Tributes page to make it easy to share your memories.

Send flowers to the Crim family.