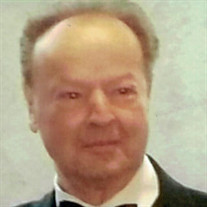 William D. "Cris" Crisovan was born on his family farm on September 2, 1926. More than 94 years later, his journey ended on November 4, 2020 in the company of his daughter Suellyn Pena and his longtime companion Evelyn Tapp. So many doctors, nurses, and caregivers worked to make Cris' final days comfortable and with a grateful heart, he would want to say "Thank You" to every one of them. The special grace provided by David Tapp, Mary Talarczyk, Laura Goode and Astou Adaw will never be forgotten. In addition to Suellyn (Victor Pena), Cris is survived by son Daniel Crisovan of Florida; sister Lillian Hauk Marks (Jim Marks); and several nieces and nephews. Son David and 13 brothers and sisters preceded Cris in death. The 14th child of Romanian immigrants Michael and Anna, Cris understood the value of hard work and the responsibility he shared with his siblings to help the family through the difficult years of the Great Depression. Even after the hard times of the '30s gave way to post-war prosperity, Cris never took the opportunity to do a day's work for granted - working 34 years as a mail carrier for the U.S. Postal Service while selling real estate and bartending in several restaurants in the Ann Arbor & Ypsilanti area on the side. He valued the trait of hard work in others and believed that "the more work you were able to do, the better". Cris belonged to the Brotherhood of the Paternal Order of Elks (B.P.O.E.) and enjoyed horse racing, occasional trips to the MGM casino in Detroit and watching all sports...but he was happiest being on the dance floor with Evelyn, his dance partner of nearly 32 years. Cris was humble, gentle and happy. He neither required much or demanded much. He wished the best for others and preferred to be at home. He loved the chance to put on a suit and tie...reminiscent of a generation of "gentlemen". Nearly a century after that little boy arrived on the farm, his work is finally done. His feet glide swiftly on a grander dance floor now, the music more beautiful and never-ending. Our minds may still talk to him, our hearts may still look for him but our souls know he is at Peace after a long and storied life. Well done Cris In lieu of flowers, memorial contributions in his name may be made to St. Joseph Hospice or to St. Jude Children’s Research Hospital. A Mass of Christian Burial will be celebrated on Friday, June 18, 2021 at 11:00 AM at St. Andrew Catholic Church, 910 Austin Drive, Saline, MI. Visitation will be from 10:00 AM until the time of Mass at 11:00AM. To sign William's guestbook, to leave a memory you have of him or for more information, please visit www.rbfhsaline.com.

William D. "Cris" Crisovan was born on his family farm on September 2, 1926. More than 94 years later, his journey ended on November 4, 2020 in the company of his daughter Suellyn Pena and his longtime companion Evelyn Tapp. So many doctors,... View Obituary & Service Information

The family of William D. Crisovan created this Life Tributes page to make it easy to share your memories.

William D. &quot;Cris&quot; Crisovan was born on his family farm on September...

Send flowers to the Crisovan family.