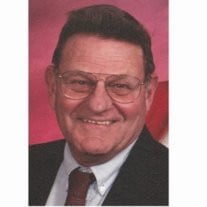 Age 82, passed away on Friday, November 8, 2013 at his home. He was born September 29, 1931 in Ann Arbor, MI, the son of Rudolph and Lucy (Jedele) Vogel. On June 15, 1957 in Saline he married Dorothy Ruth (Marion) Vogel and she preceded him in death in November 12, 2012. Bill graduated from Ann Arbor High School class of 1950. He served in the United States Navy in the Submarine Corp. from 1950 to 1954 during the Korean Conflict. Later he went on to be employed with Michigan Bell Telephone as a construction engineer for 33 years from 1954 to 1987. Then he was employed at University of Michigan for 12 years as a communications engineer from 1987 to 1999. Bill was very active in his community with Saline American Legion Post #322, The Trinity Evangelical Lutheran Church, 40&8, Michigan Bell Pioneers, and a member of Tri-County Sportsman Club. Bill is survived by their children Laurie (Jerry) Stegenga and Beth (Bob) Newman. Other survivors include grandchildren Nicole (Benjamin) Strong, Ryan Stegenga, Eric Newman, Kristen Newman, and siblings Mary Vogel, Elizabeth “Betty” (Tom) Hopper, Barbara (Ben) Putman, and Helen Vogel. He was preceded in death in addition to his wife by a granddaughter Emily Newman and two sisters Betty Hopper and Mary Vogel. Funeral Services will take place on Monday, November 11, 2013 at 11:00 A.M. at Trinity Evangelical Lutheran Church in Saline with Rev. Mark Smith and Rev. William Natsis officiating. Burial will take place in the Lodi Twp. Cemetery in Saline. In lieu of flowers memorial contributions may be made to the Saline American Legion Post #322 or to Trinity Evangelical Lutheran Church. Envelopes will be available at the church where friends may begin calling on Sunday, November 10, 2013 between the hours of 2:00 P.M. and 8:00 P.M. and on Monday, November 11, 2013 from 10:00 A.M. until the time of service at 11:00 A.M. To sign Bill’s guestbook, to leave a memory, or for more information or directions please visit www.rbfhsaline.com.

The family of William E. Vogel created this Life Tributes page to make it easy to share your memories.

Send flowers to the Vogel family.