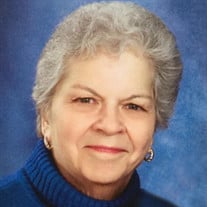 Wilma Kay Savitski, 81, passed away peacefully at home, Wednesday, November 22nd, 2017 surrounded by her family. Wilma was born March 28, 1936 in Milan, Michigan, to the late Arthur and Anna (Loesch) Cook. She attended Milan schools where she played bass clarinet in the high school band and was proud of her perfect attendance certificate. Wilma was a medical secretary at the Veterans Administration Hospital and earlier at St. Joseph Mercy Hospital, where she met a handsome Dictaphone repairman, Edward Savitski. On February 8, 1958 they were married in Ann Arbor. Wilma and Ed raised four children: Anne (Roger) Reinhold, John, Michael (Annmarie) and Richard (Lynda). Wilma was especially proud of the accomplishments of her two beautiful granddaughters, Sarah and Amanda. Wilma was a loving mother who never missed her kids’ band concerts. She enjoyed gardening, cake decorating, family picnics, holiday celebrations, and visiting with her dear friends, Greg and Ann DeFreytas. Wilma, Ed, and their children traveled often to the Upper Peninsula to visit Ed’s family, and they made several adventurous camping trips to the Western U.S. Later in life, Wilma and Ed would escape to Las Vegas for fun getaways. Wilma will be missed greatly by Ed, her children, granddaughters, brother Jerry Cook, and her many nieces and nephews. The entire Savitski family would like to express their deepest gratitude to the caregivers and staff at StoryPoint for their kindness and compassion. Cremation has taken place. A celebration of Wilma’s life will be held on Sunday, December 17th, 1:00 P.M.-4:00 P.M., at StoryPoint in Saline. In lieu of flowers, contributions may be made in Wilma’s honor to Arbor Hospice or St. Francis of Assisi Catholic Church, Ann Arbor and envelopes will be available at the celebration. To sign Wilma’s guestbook, to leave a memory, or for more information or directions please visit www.rbfhsaline.com.

Wilma Kay Savitski, 81, passed away peacefully at home, Wednesday, November 22nd, 2017 surrounded by her family. Wilma was born March 28, 1936 in Milan, Michigan, to the late Arthur and Anna (Loesch) Cook. She attended Milan schools where she... View Obituary & Service Information

The family of Wilma Kay Savitski created this Life Tributes page to make it easy to share your memories.

Send flowers to the Savitski family.